Students will work with their families to create a garment (or costume) using recycled materials.

*ALL PARTICIPANTS MUST  REGISTER AND RECEIVE CONFIRMATION TO BE A PART OF THE SHOW*   Register at this link:   https://forms.gle/Vr6yiLQzSS54nJDDA

If you have any questions, would like to be a part of the event planning team, lend your skills at a workshop/show, or have any additional ideas/suggestions please contact one of our Event Program Leaders.

There will be four OPTIONAL workshops/meetings offered to share useful information and skillsets to guide you throughout the project. If you cannot attend, please be sure to go to the website to review notes/presentations.

As a Green Flag Eco-School, PS 34's main objective of having an Eco-Fashion Show is to raise awareness of the environmental impacts of consumption and waste. In addition, our goals for the show (and the time leading up to it) is three-fold:

To encourage and create an opportunity for...

The United States is home to just 5 percent of the world's population; however, it generates 30 percent of its trash. The average American creates a staggering 4.5 pounds of garbage daily. Almost everything we do creates waste, and as a society, we are currently producing more waste than ever before.

Both consumption and waste have major environmental impacts. Producing goods and transporting them to consumers uses large quantities of fossil fuels and produces pollution, particularly carbon dioxide (the major greenhouse gas leading to climate change). When these products become waste, they have transported again, usually to landfills, where they produce methane (another potent greenhouse gas) as they break down, or to incinerators, which generate more pollution as they burn.

WHAT IS OUR THEME THIS YEAR?

Choose from one of five themes:

Remember, the objective of the Eco-Fashion project/show is to raise awareness of the environmental impacts of consumption and waste.

Therefore, please DO NOT purchase items to create your design. Instead, be creative - reuse materials you would normally throw away!

Along with your outfit/costume, you will need to include a short "narrative" for the show that will be used to introduce you and your design. (Include the materials you used.) To help with this, think about the following framing questions: WHAT, SO WHAT and NOW WHAT?

For example, my narrative for my Electric Vehicle costume can be, "Traditional cars burn dirty fossil fuels which cause air pollution. Electric cars, on the other hand, have zero tailpipe emissions, which means cleaner air. I believe that Electric Vehicles will be the future of transportation. My outfit is made of cardboard boxes, cereal boxes, and shipping foam."

For example, if I wanted to create an outfit/costume in the "Energy" theme, perhaps I will construct an Electric Vehicle (EV) costume. Try to be more specific within the theme... instead of a general outfit of "Water," be an oyster that lives in Newtown Creek or a water droplet traveling to NYC's tap from Croton aqueduct. Instead of creating a whole SYH/Garden dress, focus on a special native plant or pollinator insects in the garden. 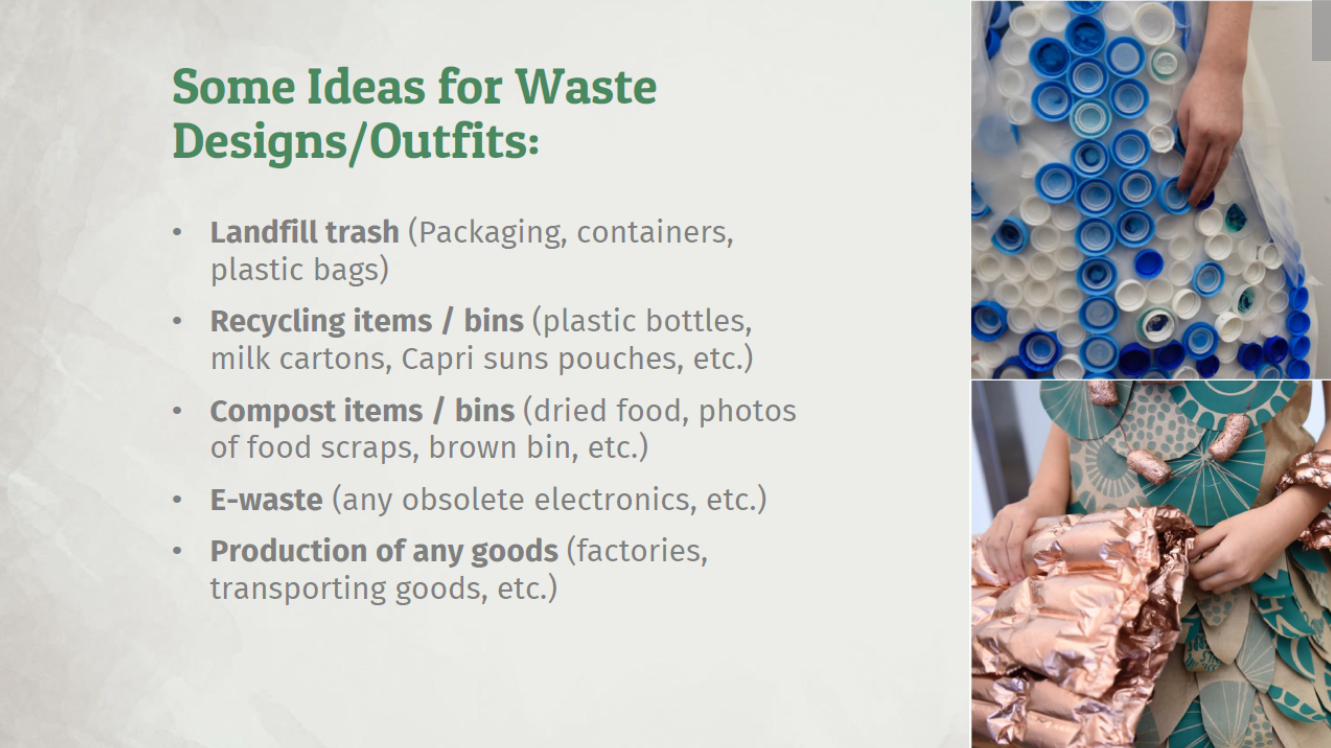 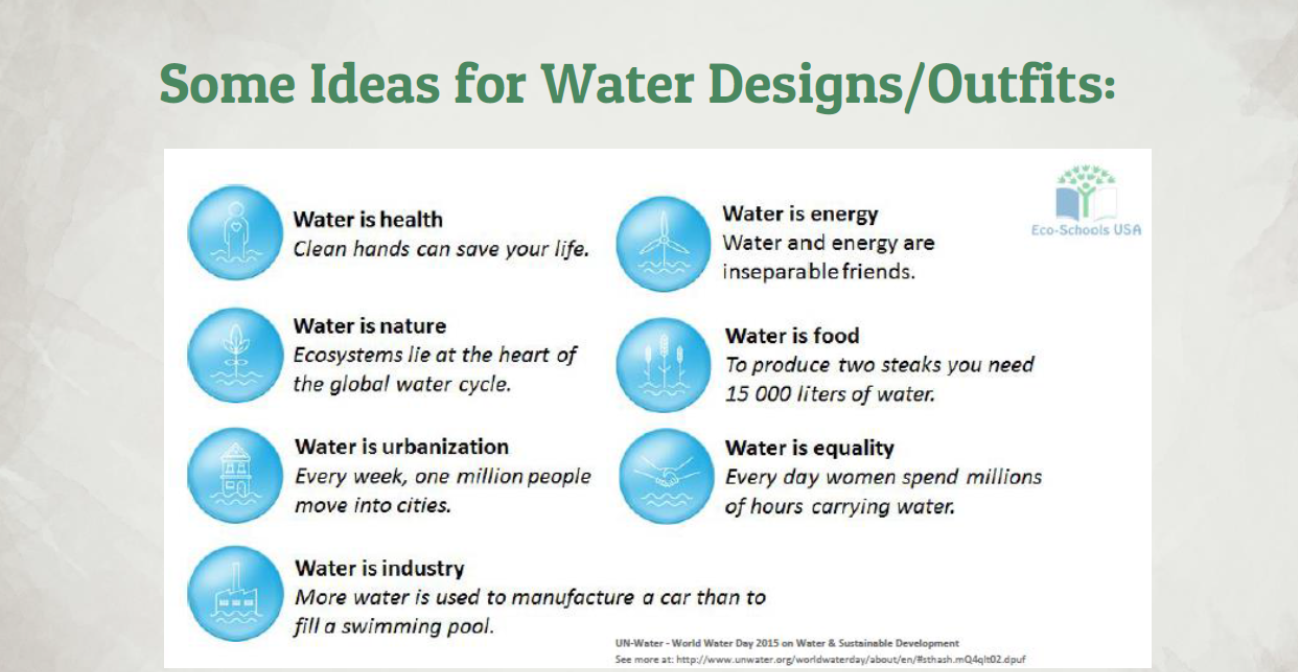 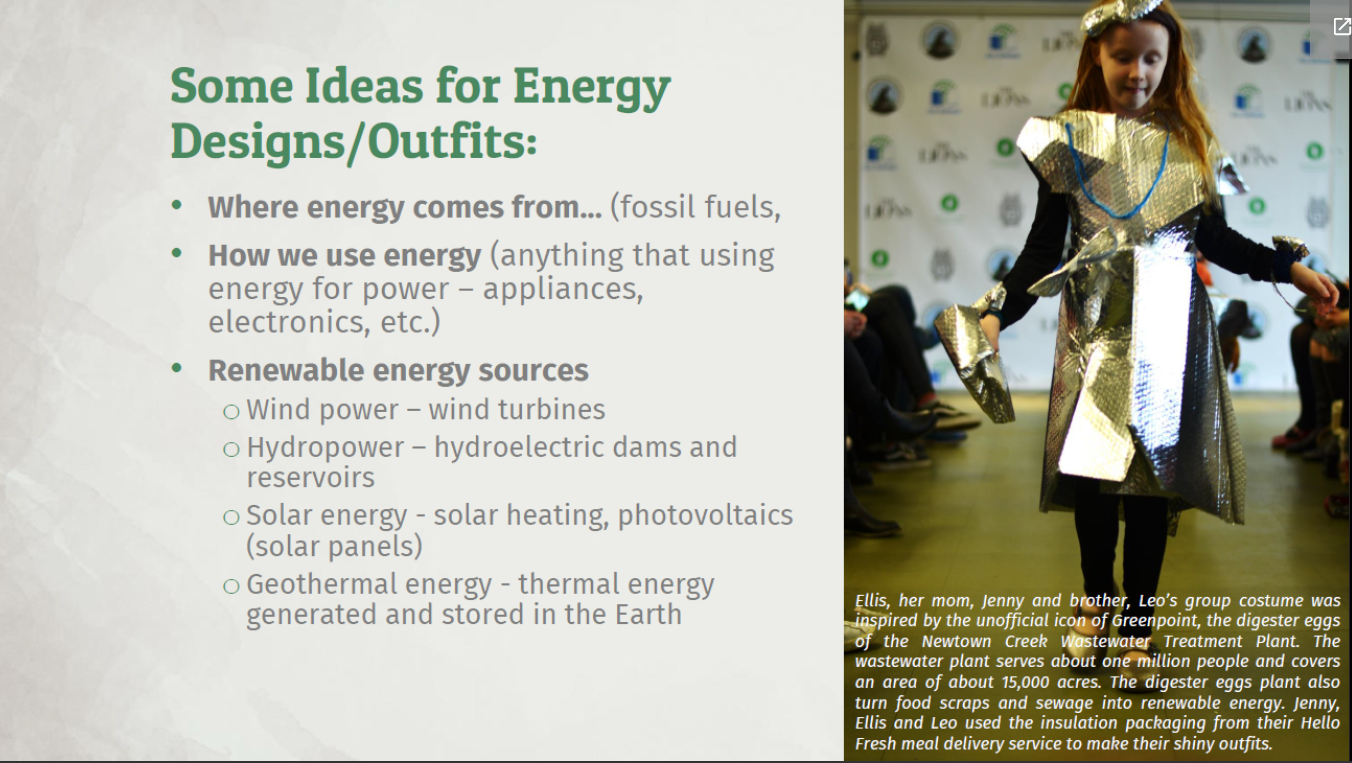 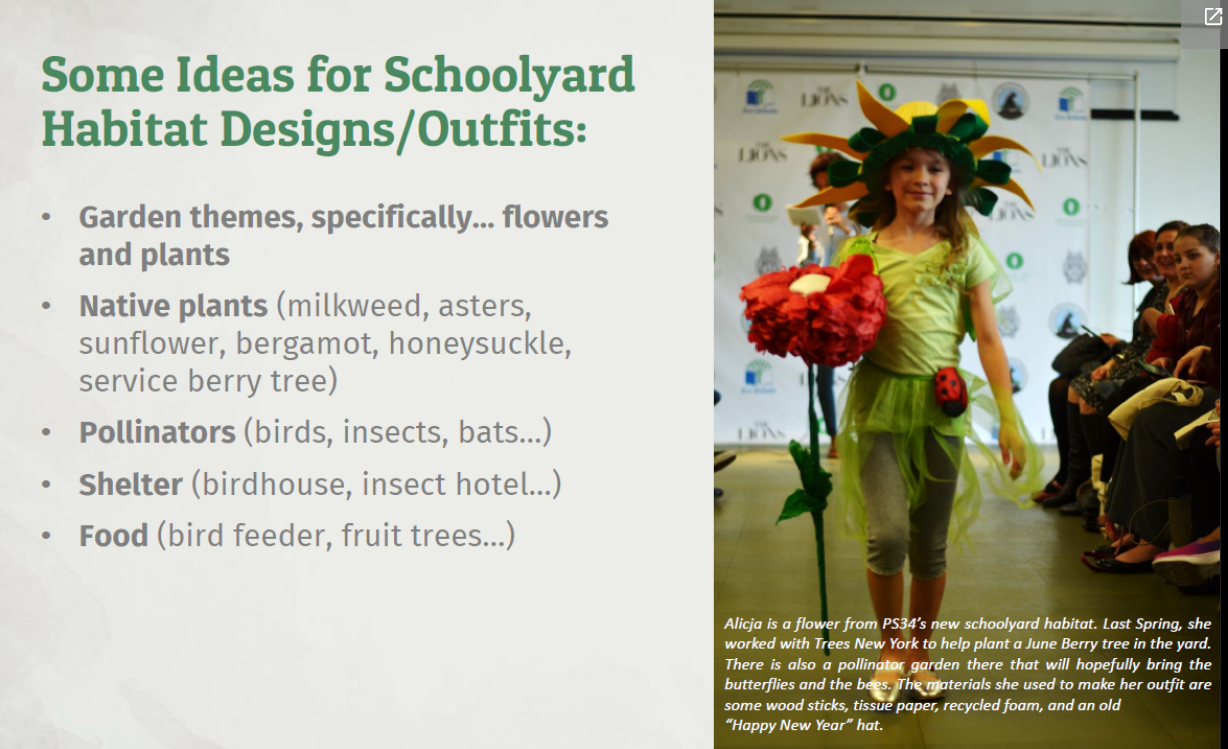 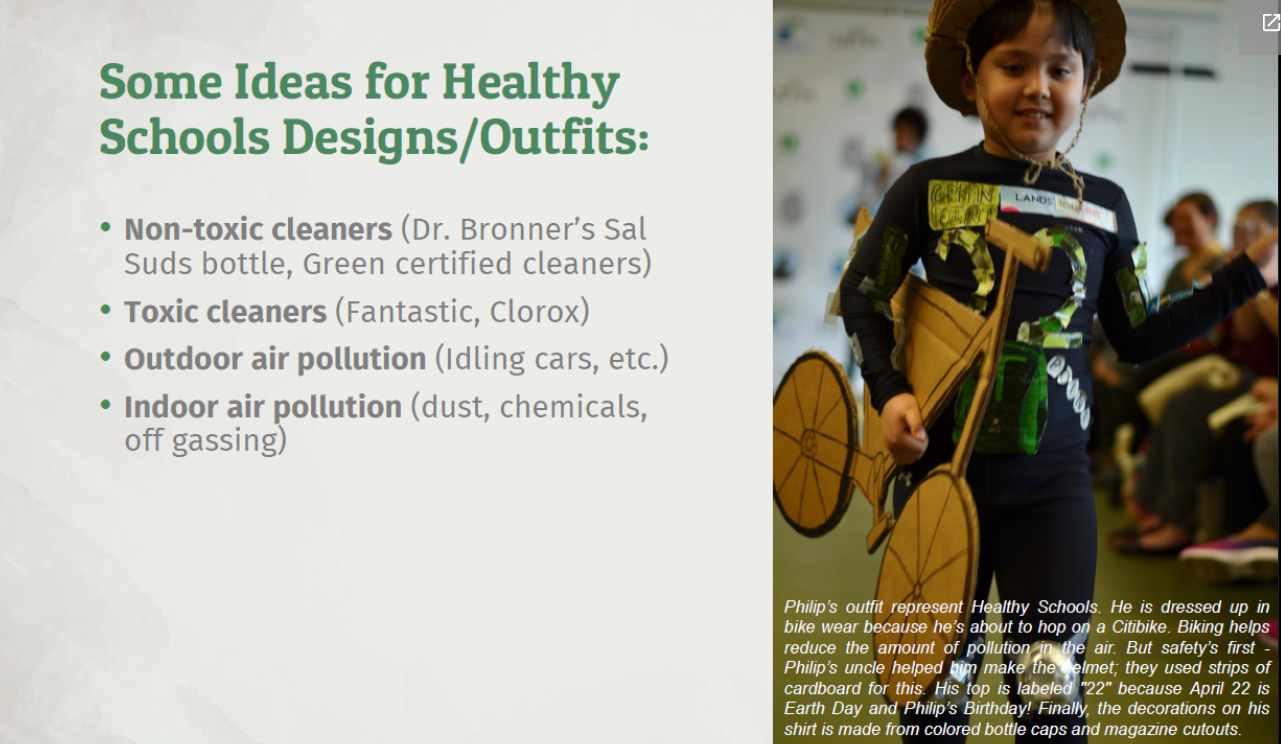